WHAT IS THE SECURE ACT?

The Setting Every Community Up for Retirement Enhancement Act (The SECURE Act) was part of the most recent $1.4 trillion year-end spending bill, approved by the Senate on Dec 19th, 2019, and subsequently signed into law by President Donald Trump. The act was part of an end-of-year appropriations bill and accompanied by provisions that impacted the nation’s retirement system. The goal of these provisions is to provide additional opportunities for Americans to save in order to strengthen their retirement base.

The SECURE Act contains significant changes to retirement plans; you will find additional information on the following key areas that impact individuals below:

Each situation is unique and should be discussed in detail with an advisor, accountant or legal counsel prior to implementation

REMOVAL OF THE “STRETCH” PROVISION

What was the “Stretch” provision?

Under the rules prior to the passing of the SECURE Act, when the holder of an IRA passed away the beneficiaries were able spread (or stretch) the required distributions from the inherited IRA over their lifetime. The SECURE Act removed the “Stretch” provision and replaced it with a 10 year required distribution period (summarized in the following section). 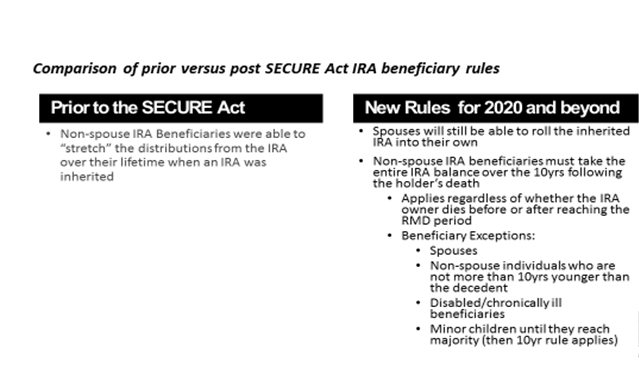 Impact of the “Stretch” provision removal

***Please consult a legal professional regarding the language in your trust*** 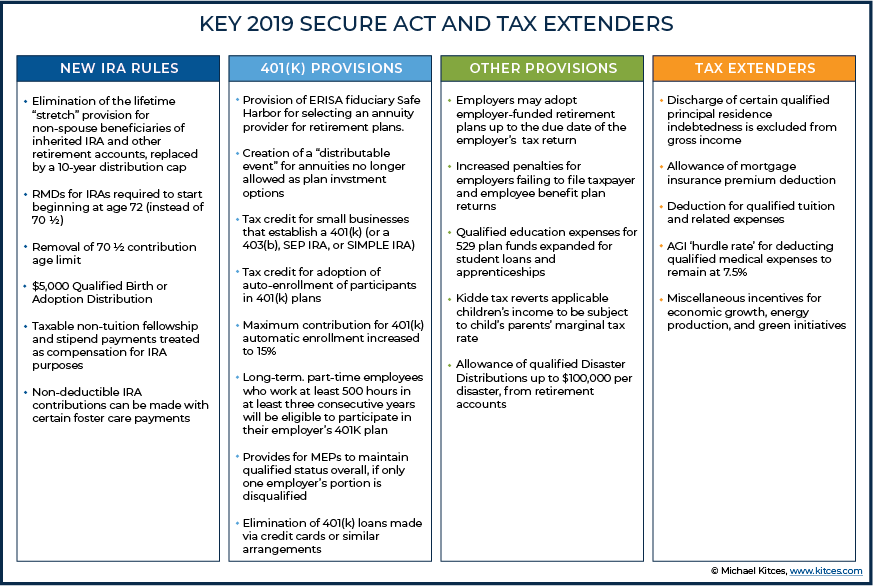 For information purposes only. Opinions expressed herein are solely those of Droms Strauss Wealth Management, unless otherwise specifically cited.  Material presented is believed to be from reliable sources, but no representations are made by our firm as to another parties' informational accuracy or completeness.  All information or ideas provided should be discussed in detail with an advisor, accountant or legal counsel prior to implementation. Past performance may not be indicative of future results. Indexes are not available for direct investment. Any investor who attempts to mimic the performance of an index would incur fees and expenses which would reduce returns.

We help our clients achieve financial independence...not necessarily "retirement" but instead, having the ability to have the life you look forward to and knowing you have the financial ability to step away from you job or career - even one that you might enjoy so that you might realize other long term objectives.

Whether it involves long-term care planning, a review of existing life insurance policies or something as mundane as a review of your home and automobile liability coverage, we can assist you in determining whether you have the proper coverages. We are not insurance agents but we do know what to look for in your policies and determine whether or not you need to make changes.

Are you struggling to understand how the new tax laws impact your family? We can help you determine what strategies can be used to minimize your income taxes and can structure your investments to minimize your tax burden.

Do you have an up to date estate plan? We regularly work with attorneys to make sure that your plan documents are current and achieve your dispositive objectives and meet all of your concerns.

Do you use appreciated securities for your charitable giving? Have you considered how a donor advised family fund might actually save you taxes and be used for your annual charitable giving? We can help .... from explaining the concepts all the way through execution.