As we survey the investment landscape for 2020, we find both optimism and clouds on the horizon. Optimism comes in the form of near universal agreement among major economic forecasters that the economy will most likely avoid a recession in 2020. Typical forecasting comments mirror the recent publication of Goldman Sach’s “Market Pulse” which notes: “We expect global growth to recover from 3.1% in 2019 to 3.4% in 2020 in response to easier financial conditions and an end to trade escalation. Though cyclical risks have risen, we still think a recession in 2020 is unlikely.” Similar sentiments are reflected in J. P. Morgan’s “Investment Outlook for 2020:” “The U.S. economy has returned to slower growth, but should avoid recession in 2020. Overseas economies should see modest improvement as trade tensions ease.” Obviously, no one can say definitively that there will not be a recession in 2020, but the odds are against one.

Clouds on the Investment Horizon

On the cloudy side of the horizon are concerns about trade, Brexit, the U.S. presidential election, and a slowdown in some sectors of the U.S. economy.  A recent publication by CreditSights entitled “What can Topple the Market in 2020?” lays out these concerns with respect to the bond market.  Although the trade agreement with China this month significantly reduced the dangers of an all-out tariff war between the U.S. and China, tariffs are still an issue in this relationship.  There also are tariff issues between the U.S. and Mexico, Canada and the European Union all of which weigh on U.S. economic growth.  Also in the international arena, the strong election results for Boris Johnson this month certainly reduced the uncertainty level surrounding the United Kingdom’s exit from the European Union, but the lack of details and approvals keep Brexit on the list of worries.

On the economic front, some sectors of the economy are slowing although consumer spending, which is 70% of Gross Domestic Product, remains strong.  The question is the extent to which strong consumer spending continues and offsets other slowing sectors.  Finally, the U.S. presidential election is an obvious concern.  Democrats and Republicans are increasingly entrenched in their respective political positions and the election result has the potential to have a major impact on the economy.

A Balanced Approach to 2020

All things considered, the investment outlook from J.P. Morgan Asset Management makes a lot of sense to us. Their fourth quarter investment outlook subtitle is “Investment strategies for a late-cycle environment.” Having passed its tenth birthday, the current economic expansion certainly is in late cycle, but continued growth appears to be the most likely scenario for 2020. Given that the economic outlook is always cloudy, we were pleased to see our long-held aversion to market timing emphasized in the J.P. Morgan paper:  “. . . timing the market around elections or any other market event requires investors to decide when to get out and when to get back in.  Most critically, the impact of those well intentioned by misguided activities tends to significantly hurt performance returns as we show in [the exhibit]” [reproduced below]. The exhibit shows that for the 20-year period ending December 31, 2018, the 5.6% annual return on the S&P 500 Index that would have been returned by remaining invested would have been cut by more than half if market timing attempts resulted in missing the best 10 days of the period. Missing the best 20 or more days would have resulted in a loss. 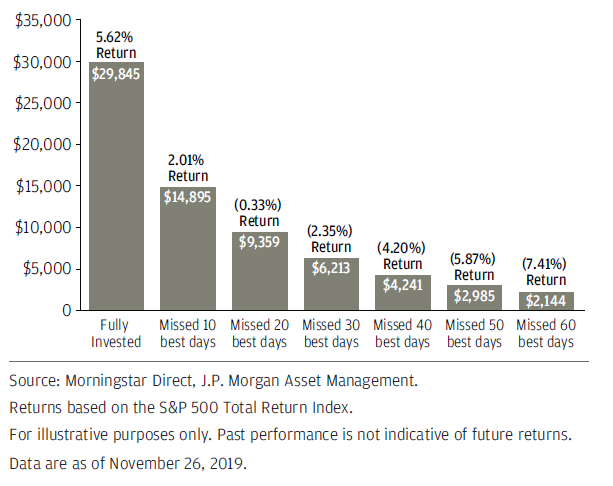 The J.P. Morgan data certainly support our policy of consistent investing in a diversified portfolio as the best defense against difficult markets.

Best wishes for happy holidays and a magnificent New Year!

For information purposes only. Opinions expressed herein are solely those of Droms Strauss Wealth Management, unless otherwise specifically cited.  Material presented is believed to be from reliable sources, but no representations are made by our firm as to another parties' informational accuracy or completeness.  All information or ideas provided should be discussed in detail with an advisor, accountant or legal counsel prior to implementation. Past performance may not be indicative of future results. Indexes are not available for direct investment. Any investor who attempts to mimic the performance of an index would incur fees and expenses which would reduce returns.

We help our clients achieve financial independence...not necessarily "retirement" but instead, having the ability to have the life you look forward to and knowing you have the financial ability to step away from you job or career - even one that you might enjoy so that you might realize other long term objectives.

Whether it involves long-term care planning, a review of existing life insurance policies or something as mundane as a review of your home and automobile liability coverage, we can assist you in determining whether you have the proper coverages. We are not insurance agents but we do know what to look for in your policies and determine whether or not you need to make changes.

Are you struggling to understand how the new tax laws impact your family? We can help you determine what strategies can be used to minimize your income taxes and can structure your investments to minimize your tax burden.

Do you have an up to date estate plan? We regularly work with attorneys to make sure that your plan documents are current and achieve your dispositive objectives and meet all of your concerns.

Do you use appreciated securities for your charitable giving? Have you considered how a donor advised family fund might actually save you taxes and be used for your annual charitable giving? We can help .... from explaining the concepts all the way through execution.